In Zimbabwe, forest resources are under constant pressure and are called upon to produce useful forest products, environmental services, wildlife habitat, recreation, and opportunities for livelihoods. Many of these demands conflict with one another – for example, the need to convert forested land to agricultural production in Zimbabwe due to the increasing demand for food and fuel is a threat to the use of natural forests as carbon sinks. Conflicting demands increase as the human population continues to grow, income levels and wood and food consumption rates increase at a time when the area of natural forest continues to decline.

Forestry Commission first produced a national land cover map in 1992, with technical and financial assistance from GIZ.The statistics for 1992 have been used for all international reporting e.g. FAO Forest Resource Assessment (FRA) and sustainable development goal number 15. The 1992 land cover maps were produced from interpretation of Landsat images of 30 metre resolution.

Knowing how and why forest area changes over time is important for managing forests sustainably because such changes may result in long-term deletions (e.g. forest conversion to agriculture) from the forest land base or additions (e.g. afforestation). Therefore, the current need to periodically update the data of Zimbabwe to provide the forest community, particularly at national level with reliable information to describe the forests and how they change over time, to support decisions and programs about its sustainable management and utilization.

Zimbabwe is a signatory to the UNFCCC requirement for parties to submit National Communications. Zimbabwe has resolved to use the latest 2006 IPCC Guidelines and the 2019 refinements in GHG inventory of the AFOLU sector for the fourth national communication (NC4) and first biennial update report (BUR1). These guidelines entail the use of land representation, an analysis undertaken to identify and quantify human activities on land and track their changes over time, resulting in stratification of the total area of the country into strata (land units). This requires the use of remote sensing and satellite data, allometric models and biomass density maps for estimation of biomass carbon. It also entails assessment of changes in land areas and land use changes over time, and estimation of soil carbon and non-carbon GHGs from soil. This data is not captured by most of our data providers. This data is central and useful not only in NC4 and BUR 1, but also in the country’s Low Emission Development Strategy (LEDS), National Adaptation Plan (NAP) and Nationally Determined Contribution (NDC). 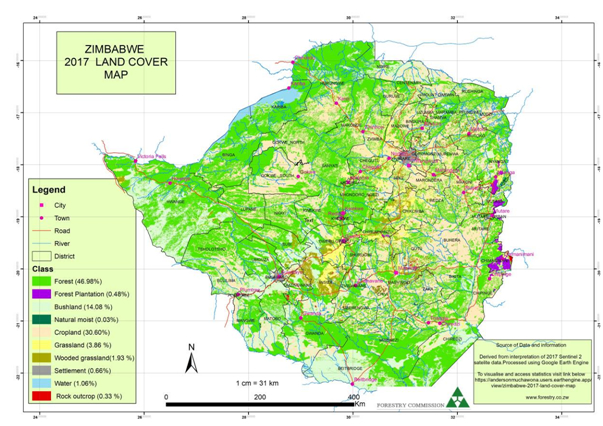 Forestry Commission Mapping and Inventory Unit developed a digital platform that allows easy access to the map and statistics. The platform was developed for 2017 and 1992 land cover map, it allows the user to view, generate and download statistics. The data can be accessed at district level.

The land cover app is in the Google Earth Engine interface and the user can access freely. The app is supported by the computing power of Google. The platform makes it easy even for people without prior remote-sensing experience to access the map. The scope of the new sharing platform is not limited to forest assessments only. It serves other reporting needs as well, including its significant contribution to the NDCs, LEDS and to the forest related indicators of the Sustainable Development Goals (SDG). 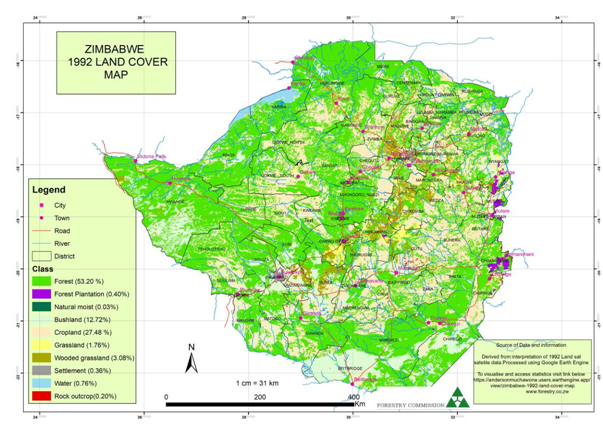